FusionCharts helps you make kick-ass dashboards that can be viewed on a PC, Mac, iPad, iPhone or a majority of mobile devices. To view these dashboards, you open your favorite browser, go to the URL of the dashboard either by typing in or clicking through, the browser loads the content and FusionCharts, and you finally get to see your interactive dashboards. It all works fine! But, what if your management asks you to deliver the dashboard through email at the end of each day, so that they do not have to remember to visit the dashboard?

While you try and explain them that they’ll lose all the interactivity in the dashboard like drill-down, slicing and tool-tips, which they’re used to in the web version, they still want to be able to see elements like tables and charts in their email. This lands you into another problem. While tables and other HTML elements can be easily rendered in an email, the charts in that are rendered through JavaScript in a browser would not render in an email client, owing to security reasons. So, the only option you have is to convert these charts to images, server-side, before the email is composed. In this post, we will explore how to achieve this using a community plugin – FCImg.

FCImg is a free PHP chart library that allows you to generate PNG and JPEG images of your charts on the server, without even rendering the chart in a browser. It renders the JavaScript version of FusionCharts at the server and and then internally uses the open-source wkhtmltoimage shell utility to convert the charts to images. See live generation of chart images at FCimg gallery. 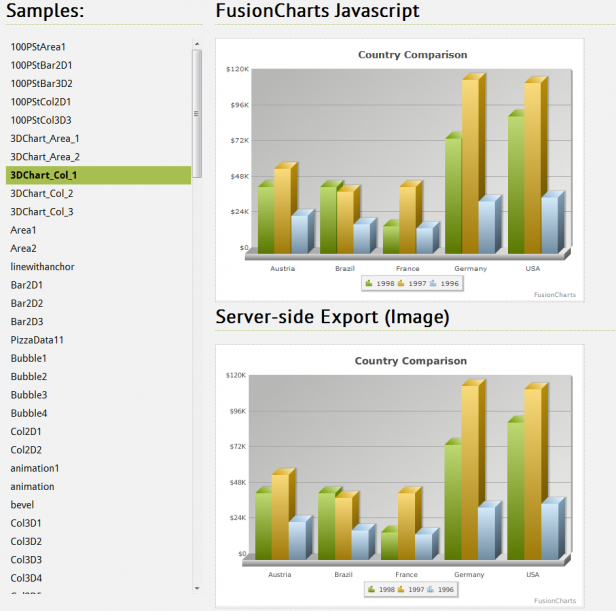 The chart images generated by FCImg could be used in the following scenarios:

To get FCImg for your server, choose the right variant from the list below:

The system requirements to run FCImg are:

After downloading the appropriate variant, extract the package to a path on your server that is accessible by your PHP Scripts. You will find that there is only one folder – fcimg. Inside this folder, you will find a /bin sub-folder, fcimg.php and template.txt. Next, you will need to set the right permission for the /bin folder contained within this folder. On Linux systems, the contents of /bin needs to be executable. If you downloaded and extract the files directly on the server, the file permissions are already set. However, if you transferred the files using FTP, then you need to set the permissions manually using this command from the directory where you extracted fcimg:

Using FCImg is fairly simple. You include the fcimg.php file and invoke fusioncharts_to_image function with a bunch of parameters, as listed and explained below.

The fusioncharts_to_image method takes the following arguments, listed in order:

When you now run this script on your server, you will find the output chart image file [cciel lang=’javascript]report.png under /var/www folder of your server.

What happened behind the scenes?

When this script executed, the following actions happened behind the scenes:

FCImg takes a couple of seconds to export a single chart on a basic server. This delay is intended because the default animations of FusionCharts take up to 1.5 seconds to complete on certain charts. The fusioncharts_to_image function is a blocking call. It means that the PHP script will not continue until the rendering process is complete (unlike event based callback systems). It is best to call this method in PHP scripts that run on the server directly and do not serve output to browsers e.g., in a script that generates emailed reports, or a script that is executed through a cron-job.

Note that the order of files added is important.

Getting on with it

Do give FCImg a spin. It’s useful. It’s free. And if you encounter some painful situations, give a shout to the developer at [email protected]. It will help if you include details like the XML/JSON data.

45 responses on “Generate chart images on the server using FusionCharts”