This article is the fifth and final post in our series ‘Principles of Data Visualization’ #PoDV.

In the past few weeks, we discussed the goals of data visualization and how preattentive attributes and analytical patterns enable us to process visual information. However, when designing visualizations, we often want to highlight certain aspects of the visual over others. In these cases, Gestalt’s Principles come in handy.

Using the Gestalt Principles to Bring Out Patterns in Visualizations

Gestalt principles describe how our mind organizes individual visual elements into groups to make sense of the entire visual. When designing a visual, these principles can highlight essential patterns and downplay other patterns. The image below illustrates the principles of Gestalt, which are relevant to visualization (you can see a more extensive list on Wikipedia).

Here’s what we notice from each of the illustrations:

These principles allow us to perform many tasks, such as reducing the noise from charts, choosing the ideal aspect ratio, and clearly showing relationships between elements. Let’s look at a dashboard and see these principles in action.

An Example From Recorded Future

We’ll consider the following visualization from Recorded Future, a web intelligence company. This visualization compares the mentions of Apple, Google, and Microsoft across the web over the next five years.

The first thing you notice when looking at this visualization is that the bubbles stand out against the backdrop of the area charts. This is appropriate considering the designer wants the viewer to explore deeper information embedded within the bubbles. The area chart, which is grayed out, shows the trend over time and isn’t meant to be explored. This is an excellent example of the Gestalt principle of Figure & Ground.

The bubbles are organized in three distinct groups along the horizontal line. We can identify the three groups of bubbles quickly because of how close they are to each other. Notice that enough space is given between each group to make them distinct. This uses the principle of Proximity.

Further, we notice that the bubbles are of three colors – green, purple, and blue. This Similarity brings out the grouping even more clearly.

Going Up, Going Down, Remaining Flat

These patterns are most visible in the area chart. We notice that the overall trend for Apple is upward, while Google’s Microsoft stays flat.

There are many peaks within the area chart, but one of them for Microsoft is particularly noticeable in January 2015. This peak is narrower than the other peaks.

Zoning in on the bubbles for Microsoft, we notice an outlier for Microsoft in mid-2015. The other bubbles fall within a more normal range. Seeing these patterns makes us want to further probe into them.

We use the preattentive attribute of position to track the rise and fall of the area chart. Similarly, we notice the abnormal bubble in Microsoft’s chart because of its higher position than the other bubbles.

The bubbles vary in size. Their size corresponds to the number of web mentions for a particular topic. This makes it easy to spot the essential mentions and explore them in detail.

As mentioned earlier, the color of the bubbles makes it easy to classify them into three groups. This employs the preattentive attribute of Hue.

Finally, the low intensity of the area chart places it in the background, giving priority to the bubbles.

Being aware of the preattentive attributes, analytical patterns, and Gestalt principles can make a visual come alive. Also, when designing visualizations, the Gestalt principles allow us to prioritize basic patterns and downplay the noisy ones.

Understanding these basic principles of data visualization will help us craft outstanding visualizations and tell compelling stories, much to the delight of our colleagues and end-users.
If you’ve missed any of the previous posts in this series, here they are:

Additionally, if you’d like to read the entire series in one sitting, get our white paper ‘Principles of Data Visualization.’ 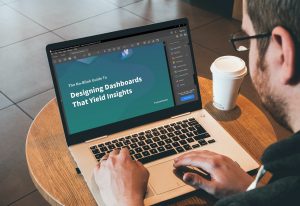 Top10 Dashboard Design Errors (and How to Avoid Them)